The most popular winter sports – skiing and snowboarding

What is skiing / snowboarding?

Guess there isn´t much to explain about skiing or snowboarding. You have two skis or one snowboard and the goal is to ride down any hill or mountain without falling down… sounds easy – believe me, it´s not! 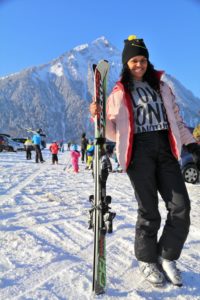 What to use for skiing and snowboarding

It´s a lot of stuff you need to be ready for it. First of course, you need a pair of skis or a snowboard. But just with that, it´s not done yet. You also do good, if you have warm clothes including a pair of gloves and sunglasses aren´t a waste of money either – not only because of the sun, it´s also because of the reflections on the white snow and the strong wind when you ride down a steep slope with 100mpH. Furthermore most people are using helmets these days which is much more saver. For both skis and snowboard, you will also need special shoes which you can see in the picture above.

Skiing / snowboarding in the Swiss alps

Skiing and snowboarding in the Swiss alps isn´t the cheapest thing to do. But there are some nice ski areas far away from big touristic places which aren´t that expensive and have some good slopes even for beginners.

So don´t hesitate and try for once to ride down a beautiful white mountain with the skis or the snowboard!